Tyler “Korso” has been performing magic for over a decade. Unlike many magicians with stories of unwrapping their first magic kit on a birthday as a child or seeing a magician at a party, Korso found his love for illusions and sleight of hand much later in life. As a student of theater and mime, he encountered many circus performers and would learn a few things here and there, ultimately turning into the spark that put him on this magical path. Since those first few card tricks piqued his interest, Korso has performed for corporations and theaters across the country.

In 2019 he debuted his one-man theatrical production “A Man and His Dillusions: A Modern Magic Show” in Kansas City, which has run once a month to rave reviews. Adapting to the new normal, Korso transformed his live shows into virtual performances.

His next public performance is “From Afar: A Virtual Magic Show” on Saturday, May 30th, 2020. Tickets and info can be found at www.korsomagic.com/tickets

With a specialty in making corporate events memorable, and keynotes entertaining, consider Korso for your next event! 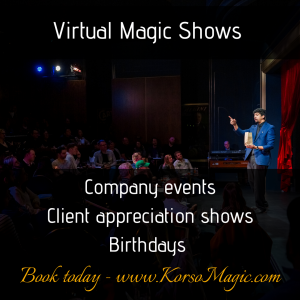 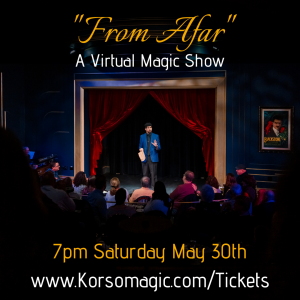